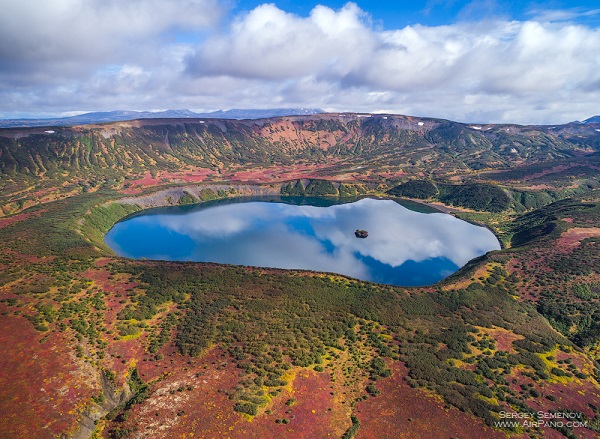 The caldera of the Uzon volcano. Despite the fact that this place is not so well known, it does not become less gorgeous and surprising from it. Strong volcanic processes formed this giant Caldera – a huge bowl-shaped basin measuring 9 by 12 km, which was formed on the site of a serious eruption about 40,000 years ago.

What used to be the slopes of the volcano is now a chaotic conglomeration of rocks 700 meters high in the northern and western parts of Caldera. On the western slope, the highest point is Baranya Peak, whose height is 1600 m. The last catastrophe, which occurred in this area about 8,000 years ago, formed a crater 1 km in diameter, which is now the location of Lake Dalnego. Subsequent centuries of active hydrothermal activity have given a special character to this area, thanks to the interaction in it of wildlife and volcanism.

The caldera of the Uzon volcano abounds with hot springs of various shapes and sizes, countless gas and steam outlets, soaring mud boilers and volcanoes, hot lakes. There is even a network of sources with mineral water Narzan. The soil, rich in minerals, is unusually multicolored. Panorama of the Caldera of the Uzon volcano looks unearthly along with its countless blue, red and lemon-yellow puddles. They all boil, boil and murmur!

Uzon is a masterpiece of nature! Here you can find everything that Kamchatka is known for. Birch stone forests grow next to the plants of the tundra and high-mountain meadows, and the mountains are located next to the marshes. Only here you can witness how young oil appears on the surface of the earth and how the volcano is extinguished. Dozens of species of birds and animals that have been able to adapt to the unusual environment of Caldera inhabit this area: the sandpiper, the klikun, various kinds of ducks and, of course, bears.

The outer slopes of Caldera, with a height of up to 400 m, are cut by narrow valleys. Dense thickets of pine flint and alder can only be overcome by bears. Severe winds, fogs and cold rains all remain outside Caldera. Uzon lives its own life, and the climate of this area differs from the climate of the rest of the territory.

What makes the Caldera of the Uzon volcano so special is the process of formation of new minerals and thermal lakes, which simultaneously passes with the appearance of young oil on the surface of the earth. Microbiological processes in this area are unmatched. Hot springs, rich in arsenic, antimony, mercury and copper, are a comfortable habitat for algae and bacteria. Brooks, white-colored bacteria, flowing on brown clay, look like milk rivers with caramel shores. Unique microorganisms – archaea, which do not belong to algae and bacteria, live in the hot springs of the Uzon Caldera. The peculiarity that distinguishes these microorganisms from the rest is that the usual microorganisms for breathing use oxygen, whereas the archaea use sulfur for these purposes. They also consume hydrogen sulphide to generate energy.

Another attraction of Caldera is Lake Bannoe with the release of radon. Under its false bottom, a depth of 28 m (crust of frozen sulfur) contains radon outlets and a pool of molten sulfur, so the water in it warms up to + 40 ° C, even in the winter.

Another interesting place in Caldera is Lake Fumarolnoe and Central, which do not freeze in winter. They are the largest lakes in Caldera. On the territory of the Uzon Caldera is a large number of small lakes and marshes. Because of the deep activity of fumaroles, they “boil” the lake.

In 2008, after a long quiet period, a geyser awoke, which threw water to a height of 6 m. Its name is Mutny. This geyser is also a landmark of Caldera.

The indigenous inhabitants of Kamchatka – itelmen who visited Caldera and collected colored clay for the manufacture of paints, kept this place a secret. The first guest, whom the Itelmen held prior to Caldera, visited this place in September 1854. It was the geologist Karl von Ditmar. He was the head of an expedition organized by the Russian Academy of Sciences, later in 1901 he first published information about the Caldera of the Uzon volcano. Ditmar described the thermal fields, paying special attention to the diverse outlets of hot water and steam, mentioning mud boilers and volcanoes.

In 1996, the Caldera of the Uzon volcano was included in the UNESCO World Heritage List. Together with the Valley of Caldera Uzner Geysers are the main attractions of the Kronotsky State Natural Biosphere Reserve.

There is one old legend about Caldera. The legend says that once on the site of Caldera there was a high mountain. A good warrior, whose name was Uzon, lived on top of this mountain. He defended people living in proximity, from violent eruptions, covering the craters. He also tamed animals that shook the earth. People have never seen Ouzon, since he was hiding from demons, fearing that they could destroy his mountain due to the fact that he helped people.

Mighty Uzon was lonely, and once good spirits advised him to marry a girl living in a camp in the neighborhood. Uzon visited many yurts and plague until he saw the beautiful Nayun. They immediately fell in love with each other. Uzon took the beautiful Nayun to his own place on the mountain, where they lived a happy life.

But Nayun missed her family and friends. She asked Uzon to let her go to the camp with her family. Good-natured Uzon could not refuse his beloved. He spread his mighty hands over the mountains and opened for his beloved a beautiful road to the camp. But hardly Nayun managed to go to her family, as Uzon heard a noise. There were noisy curious people who were walking along the road to look at the mountain of Nayun. This noise attracted demons, and they began to shake the nearest hills. The earth opened and swallowed up the mountain. Mighty Uzon turned into a stone. He froze in a dull pose with a bowed head and helplessly stretched hands that once were very strong. From the warrior’s petrified eyes streamed streams that filled the river flowing to the ocean along the same road along which Nayun went to her family. The demons took the hot heart of Uzon and hid it in the bottom of a cold lake, the demons themselves settled in a giant cauldron, under the heart of Uzon. Since then, demons have been cooking sulfur there to destroy all life with suffocating gas and boiling water. But Uzon’s tears chill the boiling water, turning it into mineral water, thereby showing his good attitude towards people, even after death.