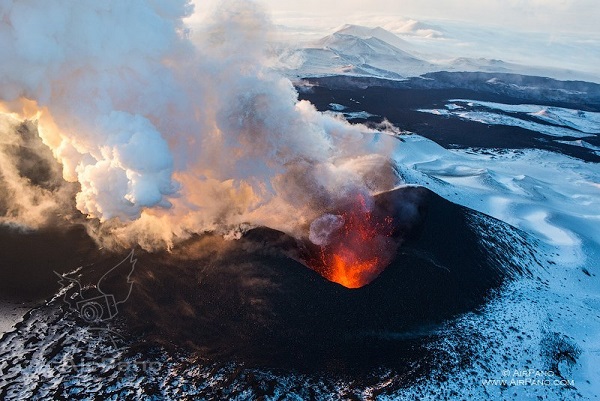 A group of scientists at St. Petersburg University during the annual expedition to Kamchatka discovered a new mineral – dokuchaevit, named after the outstanding scientist of the XIX century, the founder of soil science Vasily Dokuchaev.

The composition and crystalline structure of the find have no close analogues not only among known minerals, but also among hundreds of thousands of synthetic compounds.

Like most fumarole minerals of the Tolbachik volcano, where a new mineral was found, dokuchaevite (Cu8O2 (VO4) 3Cl3) has a unique crystalline structure and composition that has no analogues among natural and synthesized compounds. Studies of crystals of the new mineral, performed by the associate professor of St. Petersburg State University Yevgeny Nazarchuk on the equipment of the resource center of the Scientific Park of St. Petersburg State University “X-ray diffraction methods of research”, showed that copper atoms are surrounded by oxygen and chlorine in the structure of dokuchaevite. The number of diverse variants of such combinations was not previously fixed in any known mineral. SPbU researchers also found oxocentric tetrahedral complexes with copper in the structure of the new mineral.

The search for potential materials demonstrating the properties of quantum spin liquids is a very important task in modern solid state physics. It is believed that in the near future such materials will find application in the creation of quantum computers.

Since 2014, a scientific group led by Professor of St. Petersburg State University Oleg Siydra has been studying fumaroles of Kamchatka volcanoes. “Fumaroles on slag cones formed as a result of past eruptions of the Tolbachik volcano have a unique mineralogical diversity. Today, more than 400 of the 5500 known minerals are found here. We can say that the fumaroles of the Tolbachik volcano are a kind of forest of the Amazonian inorganic world, about 15% of all the minerals of the planet are concentrated here! ” – said the head of the scientific group Oleg Siidra.

Kamchatka, News, Business, Travel > Kamchatka News, Russia Far East > A mineral has been found in Kamchatka that can be used to create quantum computers