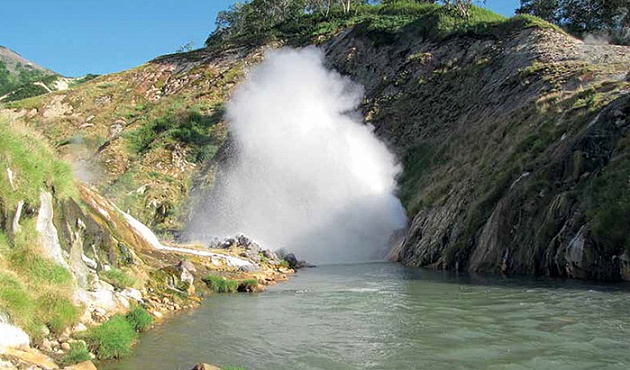 A powerful fountain of hot water continuously beats from a funnel to a height of more than two meters.

Literally two days ago, there was only a crack in this place, from which steam escaped.
The discovery was made by State Inspector of the Kronotsky Reserve Alexander Khachukaev and researcher at the Institute of Water and Environmental Problems of the Far Eastern Branch of the Russian Academy of Sciences Sergey Kolchin, who in the Valley of Geysers examines bears.

“I accompanied the zoologist on the route. On the way back we looked behind the Pilgrim rock and saw a powerful stream of water that continuously beat from the slope. A hole formed over the source in the clay slope, and a column of water also periodically burst from it. I checked the catalog of geysers of the Kronotsky Reserve, compiled by Andrei Leonov, and made sure that this object was not there, ”said Alexander Khachukaev.

The new spring is located 200 meters downstream of the Geysernaya river from the Bolshoi reference geyser – one of the main objects of the show during educational excursions, which erupts every hour.

“Because of the floods, the pressure in the hot water discharge zone in the Geysernaya river basin increased, the groundwater level rose with the simultaneous opening of the supply crack and the formation of two channels. From the lower channel of a smaller diameter in a pulsating mode, the steam-water mixture gushes to a height of about 2-3 meters. Continued constant monitoring of the new gushing source and slope is necessary, since the flood has not yet ended and the pressure under the slope may increase, ”explained Alexei Kiryukhin, senior researcher at the Kronotsky State Reserve, hydrogeologist. “A similar fountain hit a height of 1 – 1.5 m near the Malachite Grotto on May 29, 2018, though after a while the fountain stopped.”

The ecosystem of the Valley of Geysers is similar to a living organism, where volcanic, hydrothermal and landslide processes constantly disappear and new thermal springs appear, landscapes change. Exactly 13 years ago, on June 3, 2007, a powerful landslide descended in the Geysernaya river valley, which changed its appearance: a dammed lake formed, some geysers were littered with rock fragments, some were flooded. Later, the turquoise lake disappeared, new sources appeared.

Tourists will be able to see the ever-changing and invariably beautiful Valley of Geysers as soon as the temporary ban on visiting specially protected natural areas, introduced in connection with the high-alert regime, is lifted. So far it has been extended until June 11.