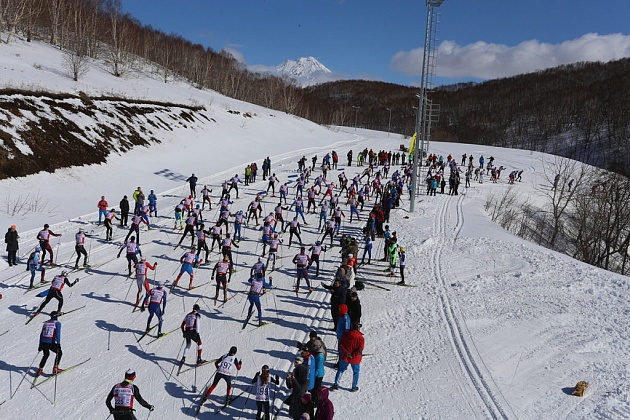 April 15, residents and guests of Kamchatka are waiting in Petropavlovsk-Kamchatsky at the sports complex. Vitaly Fatyanov – there will pass the 25th international Avachinsky marathon. In the competition will be attended by about 500 skiers from different regions of Russia, as well as Norway, the Czech Republic and Germany. Among them are famous sportsmen – two-time world champion Sergei Ustyugov, Olympic prize-winner and world champion Alexei Petukhov, members of the Russian national biathlon team and Paralympic team.

Avacha marathon is held every year on the third Sunday of April. The length of the distance is 60 km. Two circles. Free style. Since 2005, the competitions have been included in the calendar of the International Ski Federation and are part of the Russian Super Cup in the ski marathons of the Grand Prix Russialoppet. The route passes at the foot of the Avachinsky volcano. This start brings together professionals and amateurs. Participants and spectators, as always, are waiting for a large-scale event with an excellent organization, a wide prepared track, traditional folk dances, a lottery of prizes and the unique nature of Kamchatka.

Avacha marathon appeared in Kamchatka in 1984. At first it was just a match of the strongest skiers of the peninsula – the marathon distance obliged the participants to be prepared, and therefore only those who had a sports category were allowed to race. The idea arose at the honorary master of sports of the USSR Vasily Antonovich Kochkina, who trained for many years the team of the Kamchatka region in cross-country skiing. However, the existence of the competition was destined until 1987.

In 1994, Kamchatka Ski Club “Avachinskaya Skrynaya” was founded in Kamchatka on the initiative of sportsmen-veterans of skiing and biathlon, who organized the resumption of the Avachinsky marathon. That was inscribed in the Charter of the club.

In 2002 the Avachinsky Marathon became one of the 10 best marathons of Russia and was included in the calendar of the All-Russian FIS competitions as one of the 3 stages of the international ski competition of the Asia-Pacific Marathon Cup.

In different years, such stars of Russian and world skiing and biathlon took part in the competitions, such as the recognized king of ski races in 1972 in Sapporo – Vyacheslav Vedenin, World Cup winner Alexander Zavyalov, world champion 2005 Vasiliy Rochev, repeated winner of the Russian championship, team Vladimir Vilisov, members of national teams Vladimir Bersenev, Mikhail Kochkin, Eugenia Khakhina and many others.