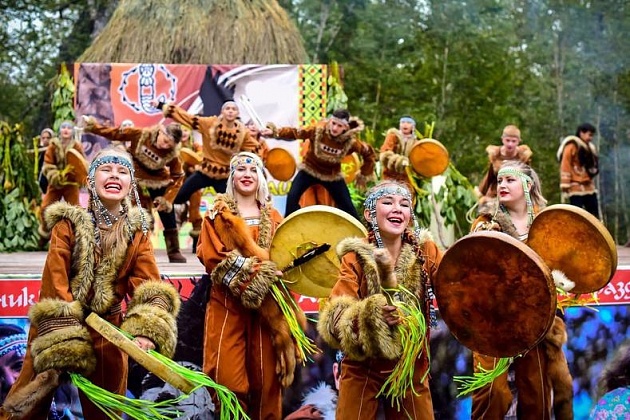 The autumn Itelmen ritual feast “Alhalalalai” will begin at noon on September 15 and will last until the next day at the ethnographic camp “Pimchah” near the village of Sosnovka in the Elizovsky district.
According to the organizing committee, the annual dance marathon, the eighth open championship of Russia in the dances of indigenous small peoples of the Kamchatka Territory, will traditionally be the most striking event of the holiday. Its participants will have a chance to break the record set by Nadezhda Neelova from the village of Manila and Dmitry Petrovets from Palana, who continuously danced 16 hours and 50 minutes last year.

Guests of the festival, in addition, are waiting for the ensemble “Ang” concert in honor of the 30th anniversary of “Alhalalalaya”, master classes in processing sea animals and nettles, competitions for cooking soup, as well as song competitions in Itelmen language, salmon processing, and terrible grimaces, with which Aborigines drive away evil spirits. The most beautiful and charming “Mimskh Alkhalalalai-2018” will be chosen, and men will compete in the contest “Leo Ikhlkh” (Best Host).

Recall, “Alhalalalai” – the main holiday Itelmen. Here the indigenous inhabitants of Kamchatka thank nature for gifts: that the Kamchatka rivers are full of salmon, and hunting is always successful. “Alkhalalalai” was revived in the village of Kovran 30 years ago thanks to the artistic director of the folkloric Itelmen ensemble “Elvel” Boris Zhirkov. In 2015, the camp “Pimchah”, where in recent years celebrate the holiday, an outstanding Kamchatka choreographer opened a monument.

In December 2009, Alkhalalalai, along with the Koryak “Hololo” and the Even “Nurgenek”, was declared an official holiday of the Kamchatka Territory. Last year he entered the national calendar of events, interesting for tourists, formed by the Ministry of Culture of the Russian Federation.