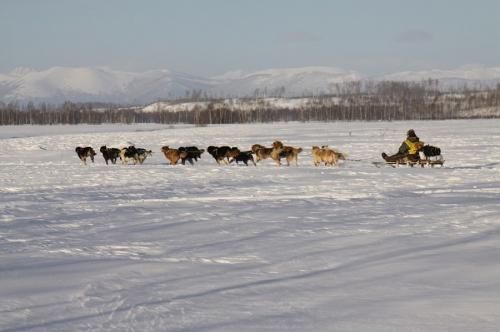 On March 11 morning in the village of Milkovo, the dog race “Beringia-2018” was launched. This year it will pass the order of 2100 km to the village of Markovo in Chukotka.

15 sentries went to the expedition. Among the participants there are 9 Kamchatka sportsmen: Vitaliy Tishkin, Alexander Chuprin, Andrey Semashkin, Anfisa Brazaluk, Alisa Ischenko, Valentin Levkovsky, Roman Mandyatov, Herman Ainachgin. On the saddle of Semen Adukanov in the race went his namesake Yaroslav Adukanov. The replacement was made on the basis of a personal petition of the former cadet with the permission of the organizing committee. 5 kayurs represent the Chukotka Autonomous Okrug in the race: Timofey Gynuntegin, Dmitry Kalyavukvun, Zakhar Vykvytke, Alexander Dolgodushev, Gennady Tomilov. In the struggle for victory also entered a crouc from Moscow, Vyacheslav Demchenko, told the agency “KAMCHATKA-INFORM” in the organizing committee of the race.

The distance is divided into 25 stages. The shortest transition will be about 20 kilometers, the longest -105 kilometers.

As the deputy head of the race “Beringia-2018” Artem Chernov, in addition to the teams in the race for 12 snowmobiles came about 30 people escort. They include 3 people of the judiciary board, 3 people of medical service – one medic and two veterinarians, volunteers and a team of laying and preparation of trails. The route is divided into 3 sections. In the first phase – “Milkovo-Klyuchi” accompanied by a cargo vehicle with fuel, fodder and equipment. From the keys to Tilichik the race will be accompanied by snowmobiles. Previously, the cargo was thrown into the villages along the highway. The administrations of Olyutorsky and Penzhinsky Districts were assigned 2 all-terrain vehicles, which will further accompany the race and assist in the transportation of goods. By the way, as a volunteer this year, the race went to the former Minister of Sports of the region, Andrei Ivanov.

As previously reported, 60 million 112 thousand rubles were allocated from the budget of the Kamchatka Territory for organizing and conducting a race on dog harnesses “Beringia-2018”. How much money for the events, in particular, for the holiday on the occasion of the opening of the race in Petropavlovsk-Kamchatsky and the village of Milkovo with the invitation of domestic pop stars, sponsors were singled out, not reported.

“Beringia-2018” claims to be included in the “Guinness Book of Records” as the longest dog race in the world. To fix the achievement in the region came the official representative of the Russian “Book of Records”.

Race on dog sleds “Beringia” is held on the peninsula since 1990. The founder of the race was the Kamchatka enthusiast Alexander Pechen. The goal of the race is to preserve and revive the traditional national way of life and original culture of indigenous small peoples of the North, as well as promote the image of Kamchatka as a unique tourist region in Russia and abroad.

The length of the Beringia-90 route was 250 kilometers. “Beringia-91” in the length of 1980 kilometers and “Beringia-92” with a length of 2,044 kilometers were recorded in the Guinness Book of Records as the longest in the world of traveling on dogs. Since 2010, “Beringia” has the status of an official holiday of the Kamchatka Territory.

All about the competitions of Berengia in Kamchatka.

2 Replies to ““Beringia-2018” started on the Kamchatka Peninsula”