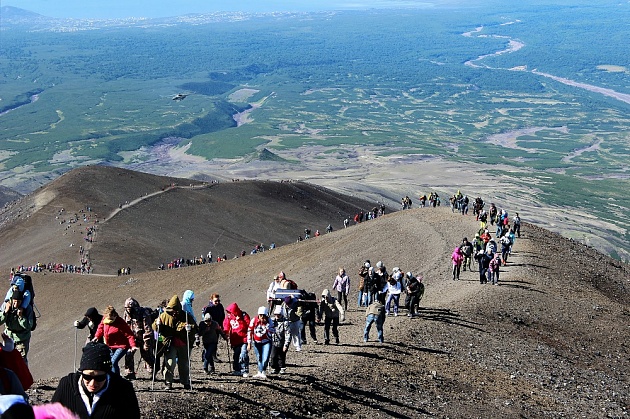 Part of the events dedicated to the celebration of the Volcano Day in Kamchatka will be postponed due to unfavorable weather conditions.

“The decision is made to postpone the holiday at the foot of the Kozelsky volcano for the next weekend, August 25-26, so that the mood of people does not cloud the weather. The entire program will remain in force, it was possible to agree with the invited artist, so that he transferred his tours in Kamchatka “, – said Vice Governor of the Kamchatka Territory Alexei Voitov.

Recall, the Kozelsky volcano as a host and DJ will perform a Russian actor and humorist DJ Serge Gorely (Sergey Gorelikov). Also in the program of the event there are master classes on the collection of volcanic bracelet and scrapbooking, bone and wood carvings, entertaining quizzes for children and adults, an interactive scientific and educational master class where, in addition to demonstrating rock samples and showing unique acting physical models of lava flows , will teach those wishing to make “real” volcanoes.

Also at the foot of the Kozelsky volcano for the first time will open “Ethno Village”. There, guests will be offered to settle in yarangas with reindeer skins, drink aromatic hot tea from Kamchatka’s wild plants, watch the performance of the national ensemble, participate in a conversation about the culture, way of life, traditions and customs of the peoples of Kamchatka. Those who wish can try on national costumes and take part in a composition photo session, taste the dishes of the aboriginal peninsula, and take part in master classes on preparation of Itelmen and Koryak dishes from berries and mushrooms.

The program on another site – the Avachinsky volcano – will remain unchanged. There will be a massive ascent, as well as skyranning competitions – the Cup of Russia and the regional championship. The collection will begin at the foot after 15 hours on Friday, August 17. In the evening of this day, the solemn opening of the holiday will take place, there will be thematic presentations about the Kamchatka giants, as well as a concert of the national collective. The ascent, according to the plans of the organizers, will begin on August 18 at 7 o’clock in the morning. The fastest conqueror of the summit will receive the main prize – air tickets to Moscow and back.

“Perhaps, corrections will be made to the route of the mass ascent to the Avachinsky volcano, but this will happen directly on the spot, the decision at the start will be reported by the Ministry of Emergency Situations,” said Alexei Voitov.

One Reply to “Holiday events on the Kozelskiy volcano are postponed to August 25-26 due to weather. Avachinsky – no change”