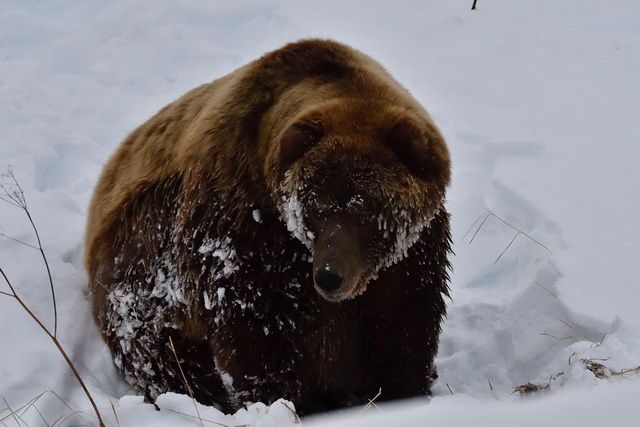 The beast appeared near the “Aerodrome” cordon on the banks of the Kronotskaya River.

State inspectors managed to avoid a conflict with wild animals. The appearance of bears on the territory of the biosphere reserve in February was recorded only for the third time in 34 years.

“We just left the cordon to the forest, when suddenly a bear came out to meet us,” said Nina Kim, state inspector of the Federal State Budgetary Institution “Kronotsky State Reserve”. “We spent about a week on the Aerodrome cordon, but until that day we had not seen traces of the beast.”

Security guards who patrol the central part of the Kronotsky Reserve did not expect to meet a sleeping bear in February. But all state inspectors have experience in the bear territories and the skills to use special tools and techniques to scare predators. When the beast lunged towards people, they had to retreat to a safe distance and ride a snowmobile several times in front of his eyes to make it clear: they are not afraid of the bear and do not pose a threat themselves. As a result, the predator left.

“For many years of observations on the territory of the Kronotsky Reserve, this is the third reliably recorded case of a bear coming out to people in February. In 1986, a depleted beast stepped onto the road by a cordon on the Kozlova River. He twice blocked the way for a group of people, behaved aggressively and was shot. In general, in the autumn of 1985 there was no harvest of berries and cones in Kamchatka, there were not enough fish in the rivers, there were a lot of rods on the peninsula, ”said Alexander Nikanorov, consultant to the scientific department of the Federal State Budget Institution Kronotsky State Reserve. – In 2008, wildlife photographer Igor Shpilenok observed a connecting rod on the Pacific Ocean at the mouth of the Pacific River. Then the beast was very exhausted and died a few days later. ”

Having examined photos of the bear from the Aerodrome cordon, state inspector Alexei Maslov suggested that this was his old acquaintance, an alpha male, who had kept local bears at bay in recent years.

“I watched the bear for more than a year. This is a very large male. In addition to harvesting salmon, he did not disdain the hunt for his relatives. Behavior and all its appearance is very similar to the famous dominant Casanova from the Kuril Lake in the South Kamchatka Federal Reserve. According to my observations, this predator is rather cunning – it attacked prey from an ambush under a tree on the river bank, where animals came for fishing, ”said Alexei Maslov, state inspector of the Kronotsky State Nature Reserve.

According to employees of the Kronotsky Reserve, bears have practically no chances to get food in this area. Animals that had spawned salmon in the tributaries of the Kronotskaya River were eaten back in late autumn. Usually, in order to survive, predators are forced to go to the Pacific coast, where you can profit from dead seals, cetaceans or marine emissions: fish and shellfish.

Recall that in the Kronotsky Reserve, the second largest protected population of brown bears lives – more than 800 individuals. The most numerous is in the South Kamchatka Federal Reserve. There are about 1000 bears there. There is no fishing in the protected areas, and plant foods usually appear in abundance, so most animals accumulate fat reserves in time and safely hibernate.