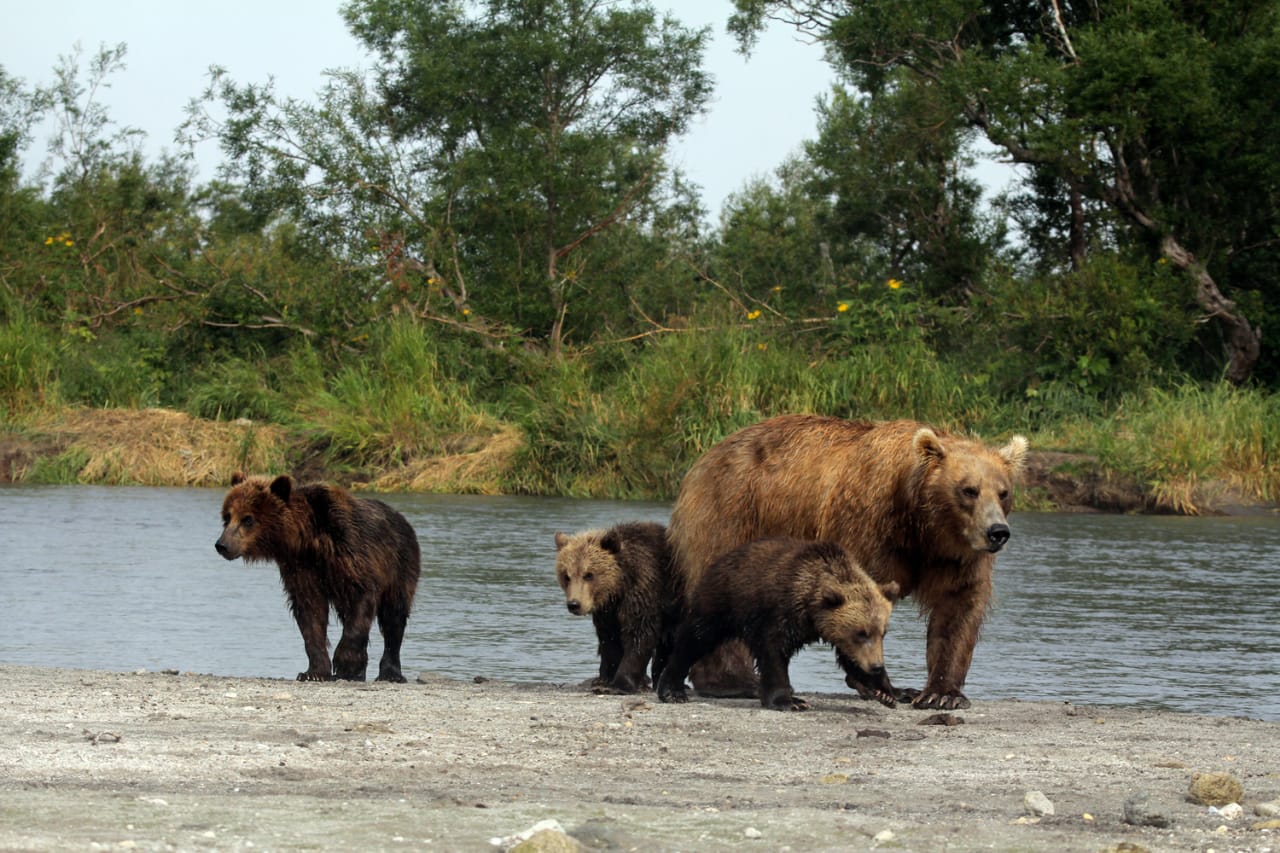 An exceptionally rare phenomenon in the social behavior of bears is observed by employees of the Kronotsky Reserve on the shore of the Kurile Lake.

A bear with two cubs took into her family another’s cub. The reason that the bear cub was left without a mother is unknown.

Currently, the behavior of bears living in the South Kamchatka Federal Wildlife Sanctuary is being studied by zoologists. For a long time, they watched the bear Aglaya and her two cubs-yearlings (the first year of life). 30 and 31 August in their company was first seen a stranger bear-lonchak (second year of life). As the researchers told, the cub stubbornly followed the family, arranged with them to rest, fed the fish caught by the female, played with the kids. Bear was tolerant enough to the presence of the orphan. After the first meetings, an unusual family of bears was re-marked only the day before. Priemysh became a full member of the family. However, one of the native bear cubs Aglaia disappeared.

“In September this year, a large number of lone cubs are registered on the Kuril Lake, both young and yearlings. And many of the year-olds lag far behind in development. This is probably due to the lack of fish that went to spawn. In the rivers of the lake basin sockeye spawns unevenly and at different times.

In July and early August, the success of catching fish to bears was complicated by a prolonged flood, – it was difficult for animals to catch salmon at great depths. By mid-August, the water level had stabilized, but the number of newly entered fish was not enough for all bears: the best forage areas are held by dominant individuals.

In search of food hungry bears, including females, accompanied by cubs, began to move widely, including making far swim in the lake in search of dead spawned fish. In such circumstances, the bear, preoccupied primarily with its own food, is forced to leave the cubs for a long time ashore at a considerable distance, which can lead to the separation of the family. Such bear cubs often become victims of male cannibals, “said Sergei Kolchin, a researcher at the animal ecology laboratory of the Institute of Water and Environmental Problems, Far Eastern Branch of the Russian Academy of Sciences.

Additional Information:
Kuril Lake is the largest spawning ground of sockeye salmon in Asia. The abundance of salmon and strict conservation regime of the South Kamchatka Federal Wildlife Refuge made this place a real bearish paradise. From the shore or observation platforms during the mass spawning of sockeye salmon, 20-30 animals can be seen at once. The ability to observe the life of bears in their natural environment attracts people from all over the world. Every year this corner of the wild nature is visited by several thousand tourists.