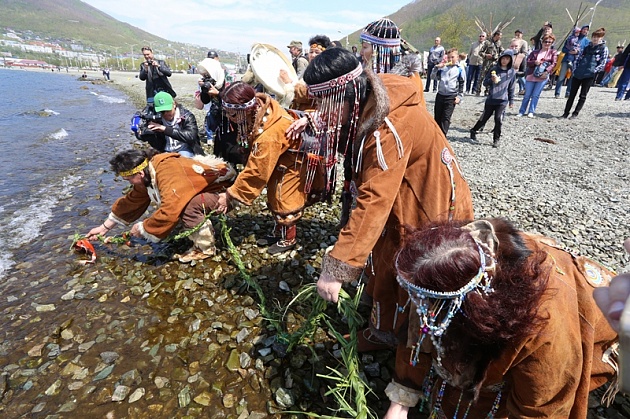 The ritual “Day of the First Fish” will begin in the center of Petropavlovsk-Kamchatsky on June 12 at 13:00 as part of the celebration of the Day of Russia. Kamchatka and the guests of the peninsula will be able to “cleanse” themselves of evil spirits and try the national dishes of the peoples of Kamchatka under bewitching songs and dances with tambourines. Traditionally, all those who came to the festival will be treated with Kamchatka soup.

In the program of the holiday – performances of national teams, exhibitions of culinary dishes and applied creativity of the indigenous peoples of Kamchatka, ethnodiscoteca, as well as interesting games and contests.

The first fish day since 2010 is an official holiday of the Kamchatka Territory. This is a traditional rite, when the aborigines meet the first salmon, magically lure the fish to the rivers to ensure its production during the summer-autumn season.
Preparation for the rite traditionally begins with weaving braids from the grass, on which string fish heads and gills. The tail of the braid should be in the water. All participants of the rite take up the scythe and go against the current of the river, all the way showing that they are pulling with difficulty, because many fish are caught. In their native language, they sentence “So many fish, we can not cope! Come here, help us! “. It is especially important to participate in the rite of pregnant women. It is believed that this will facilitate childbirth, and the magical power of spells increases many times.

Visiting the holiday The first fish day is an opportunity to come into contact with the philosophy of perception of the world by the indigenous population of Kamchatka. Severe living conditions in the North have raised a sense of gratitude to nature and its gifts among the people.