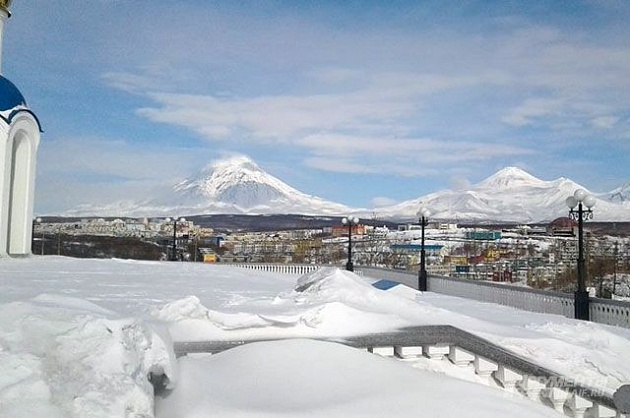 Many residents of not only Russia but also Europe dream to get to Kamchatka. What is it that attracts travelers this mysterious Far Eastern region? Thanks to the press tour organized by the Government of the Kamchatka Krai, the correspondent of the weekly “Arguments and Facts” Nikolay Tereshchenko answers this question.

A bit of history

Before the arrival of the Russians on the peninsula, it was inhabited by northern peoples – the Koryaks, Itelmen and Alutorians. The total population was about 13,000 people. The indigenous people did not know the iron, the tools were made of stone, bone, horn and wood. The main occupation – hunting, fishing and reindeer herding. Until now, crafts have been preserved in the Koryak settlements, where practically everything is made from wood and deer. At the end of the 17th century, the expedition of the explorer, Siberian Cossack Vladimir Atlasov, secured Kamchatka for Russia. And in 1740 the expedition of the Russian naval officer Vitus Bering (by the origin of the Dane) founded Petropavlovsk-Kamchatsky, which becomes the administrative center of the region. Today, the capital of the Kamchatka Territory has 180,000 inhabitants, the population of the whole region is 315,000 people, of which 78% are Russians.

The land of volcanoes

The first sight of Kamchatka, which is seen (in good weather), all arriving on the peninsula are the famous volcanoes: Koryaksky, Avachinsky and Kozelsky. They are also depicted on the arms of the province. The height of the largest of them, Koryaksky, is 3,456 meters. In total, there are 30 active volcanoes in the province, which are now asleep, or, as local residents say, they “puff” quietly. The last eruptions in Kamchatka were recorded in early 2016 – emissions from Shiveluch, Karymsky and Zhulanovsky volcanoes were observed. According to Sergei Samoilenko, founder of the Volcano Museum, which opened recently in Petropavlovsk-Kamchatsky: “This region is beautiful because we still have the opportunity and happiness to observe the birth of the Earth. Yes, our planet is still being born, and this is happening here and now in Kamchatka. The Volcano Museum, or Vulcanarium, is an interactive museum in which exhibits can be touched and viewed. In addition, you can start the clouds, go into the lava cave, see how the lava flow is formed. Visitors can watch, read, listen, touch, feel. Responding to the requests of the time, we made special stands for Selfie on the background of erupting Kamchatka volcanoes. ” By the way, in the cafe, which works at Vulcanarium, you can always taste wonderful Kamchatka herbal tea.

Sea lions in the city

Another undoubted attraction of Kamchatka is the rookery of Steller Sea lions, or, as they are called, sea lions, which is located directly in Petropavlovsk-Kamchatsky, near the pier of the former fish factory. These animals are on the list of endangered and listed in the Red Book. For sea animals this rookery is wintering, they are here from October to April. It is believed that there are only two cities in the world, where the Steller Sea lions sail to winter – these are Petropavlovsk-Kamchatsky and Seattle in the USA. So, to see these animals in the city is also one of the wonders of the world. Unlike other pinnipeds, Steller’s sea lion is really a “sea lion”, a predator that publishes a lion’s roar when it is teased. Adult males reach three meters in length and weigh up to a ton.

Racing on dog sleds is another Kamchatka feature. Having appeared in North America as entertainment in the environment of professional drivers (каюров), such competitions gather millions of admirers of the world today. The very first sports race on dog sleds in Russia – “Beringia” – took place in Kamchatka in 1990. This is one of the most prestigious racing competitions, in which both Russians and citizens of other countries participate. “Beringia” was recorded in the Guinness Book of Records as the longest track (1980 km). In 2018, this record will be beaten. March 4, the opening of the race “Beringia-2018” and its length will be already 2100 km in the Kamchatka Territory and Chukotka. But the race of professional riders is only part of the ecotourism industry. Around Petropavlovsk-Kamchatsky there are many nurseries of sled dogs, in which come wishing to drive. One of the most famous – “Snow Dogs” – is headed by the multiple winner of the race “Beringia” Andrei Semashkin. In this kennel, except for dog sledging, tourists can also hear a lecture about Kamchatka from the indigenous inhabitants of the peninsula, with traditional dances, tambourine and other ethnic interests. Sled dogs should possess high endurance, great draft power, high speed of movement, frost resistance and other special qualities. Therefore, most often in nurseries, Siberian husks, malamutes, laikas and other species of Arctic breeds are grown with the admixture of blood of Kurzhaars, greyhounds, pointers and other girlfriends or beagle varieties. Sledding and related tourism is popular not only in adults, but also in children. So, for example, the children’s race “Dyulin” almost always precedes the main race of the year “Beringia”. And almost always opens the race Governor of Kamchatka Krai, and its Organizing Committee is headed by one of his deputies.

Kamchatka has always been famous for its clean air, medicinal waters and mud. But, unfortunately, in the 90s the Soviet legacy was squandered, and now the Krai Government and a few private entrepreneurs have to rebuild with great difficulty – both infrastructure and reputation. The most resilient were the sanatorium “Pearl of Kamchatka” and the recreation center “Nachiki”, which in 2018 is going to regain the title of medical resort. In “Nachiki” the main wealth is thermal water. According to the balneological characteristics, the Nachikin mineral baths are typical representatives of the popular Kamchatka group of siliceous-alkaline, hydrocarbonate-sulphate waters with a temperature at the outlet of 80 ° C. For the swimming pool water is cooled to a temperature of 35-43 degrees. Bathe in the cold in a warm pool with medicinal water – a real luxury and pleasure. And the main direction of treatment with such water is diseases of the musculoskeletal system.

“The development of tourism is the main priority for the development of our region,” said Deputy Prime Minister of the region Marina Saturday. – We, we can say, have already established the provision of the region’s residents with food, electricity and heat. For some products, we have already reached the level of 80% of self-sufficiency. With energy, too, more or less everything is in order, we even keep farmers at a price of only 1 ruble per kilowatt-hour for agricultural producers. The rest is covered by the regional budget. But on the infrastructure for the development of tourism, much remains to be done. But here things are moving. Within three years we plan to build a new terminal of the international airport “Elizovo”. For two years – a new hotel “Parus” for 188 rooms, which is badly lacking the edge to increase the tourist flow. Now it is necessary to develop and “pack” ecological paths for family rest – for all seasons, and gradually to promote them. Very many people, including in Europe, want to get to Kamchatka, but immediately increase the flow from 200,000 tourists a year to several million, alas, will not work. This will be a tremendous burden on the existing infrastructure and ecology of the region. Therefore, we will develop this direction gradually. A small and medium-sized business to gradually increase the number of travelers will be tightened, will be opened minihotels, cafes, hostels, small tourist centers. They already exist, and prices will decline with competition. And a special issue is, of course, the price of flights. Now, for example, in March, to Kamchatka from Moscow and back you can fly for 25 thousand rubles. In the season – August-September – prices rise to 100 thousand. It is necessary to solve this issue, too, so that Kamchatka becomes not only a place for extreme tourism of wealthy people, but also a region for family recreation. ”

Kamchatka, News, Business, Travel > Kamchatka News, Russia Far East > Kamchatka is a country of volcanoes. What do travelers look for on the “edge of geography”?