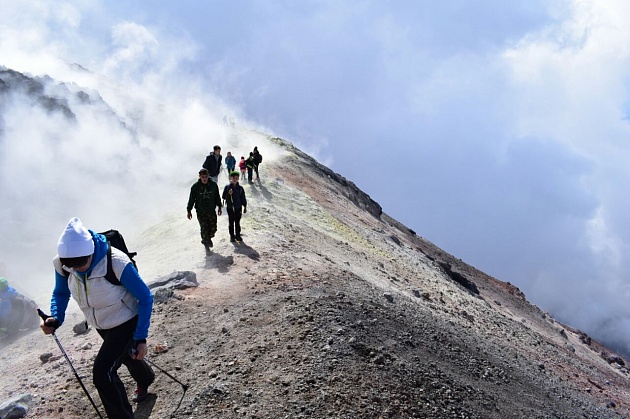 The regional holiday “The Day of the Volcano” will be held in Kamchatka from August 17 to 19. Traditionally sports and festive events will take place at the foot of “home” volcanoes – Avachinsky and Kozelsky.

This was reported in the Agency for Tourism and External Relations of the Kamchatka Territory.

“The program on the Avachinsky volcano site is designed for three days. Arrival of organizers and participants is scheduled for August 17. On this day there will be a solemn opening of the holiday, briefing, there will be thematic presentations about the Kamchatka nature, with the national teams performing the concert program. Mass ascension to the Avachinsky volcano will begin on August 18 at 7 am, “the agency said.

Before the mass start, the distance is examined by the employees of the Ministry of Emergency Situations. They will pass along the entire route, will appreciate the security of the conditions for the movement of tourists. In addition, all participants will be insured.

Another landmark event of the holiday on Avachinsky volcano will be competitions in skyranning – the stage of the Cup of Russia and the regional championship.

No less intense will be the program at the foot of the Kozelsky volcano. The main events there will also be held on Saturday, August 18.

This day there will be several sites for both adults and children. Youth creative groups, national ensembles will perform on the main stage, demonstration performances of sportsmen and masters of fitness and yoga will be held. Guests of the holiday will be able to visit the sports and entertainment site “Kamchatka Moto-fest” and the traditional “City of Masters”.

“Continuation of the” City of Masters “will be” Ethno Village “. It will first open on the Kozelsky volcano. Here you can settle in real yarangas with reindeer skins, drink aromatic hot tea from Kamchatka’s wild plants, watch the performance of the national ensemble, participate in a conversation about the culture and way of life, traditions and customs of the peoples of Kamchatka. Guests of the event will be able to take part in the composition photo session in national costumes, taste the dishes of the indigenous peoples of Kamchatka, and participate in master classes on the harvesting of fish and caviar, “the Kamchatka Territory Agency for Tourism and External Relations added.

On Avachinsky and Kozelsky volcanoes, all interested persons will be given out thematic postcards about Kamchatka, in addition, there they will install mailboxes.

The end of the holiday will be a musical and dance program.

The result of the festivities at the foot of the Avachinsky and Kozelsky volcanoes will be the environmental action to collect the garbage “I am for a clean volcano”, which will take place on Sunday, August 19.

Recall, the Avacha Pass is part of the boundaries of the natural park “Volcanoes of Kamchatka” and has the status of a specially protected natural area of ​​regional importance. All who are here to celebrate the “Day of the Volcano”, you need to get permission to visit. The registration procedure is free and takes 10-15 minutes. Considering that thousands of people visit the territory of the Avacha Pass during the holiday, it is recommended that you issue a permission to visit in advance. All details on the site of the natural park “Volcanoes of Kamchatka”: www.vulcanikamchatki.ru.

The holiday “The Day of the Volcano” originated from mass ascents to the Avacha volcano in memory of the Kamchatka businessman, patron and bard Alexander Pukalo, which were held in the last month of the summer, since 2000.

Eight years later, the regional authorities joined in organizing the event. On the “Day of the Volcano”, which won many admirers, visitors come from many regions of Russia and other countries.

“The Day of the Volcano” became one of the most striking brands of Kamchatka, along with the Valley of Geysers, salmon and bears. In 2010 he was awarded the status of official state holiday of the Kamchatka Territory. In recent years, the “Day of the Volcano” is held simultaneously at the foot of the Avachinsky and Kozelsky volcanoes.

In 2017 the Kamchatka holiday “The Day of the Volcano” was awarded a prize in the field of event tourism “Russian Event Awards” and was recognized as the best tourist event dedicated to the Year of Ecology.