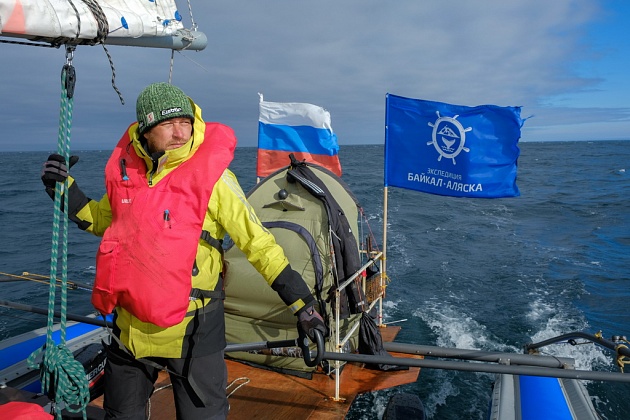 June 17 in Petropavlovsk-Kamchatsky from the embankment on Lenin Square at 11 o’clock the second stage of the Baikal-Alaska expedition starts, the participants of which for the first time in the history of navigation will overcome the Bering Strait on an inflatable catamaran of the ocean class.

Recall that in August of last year, a historical and geographical expedition arrived in Kamchatka, repeating the path of Siberian pioneer merchants, participants of the Russian-American Company, one of the most extraordinary and powerful enterprises in world history, ensuring the development of Siberia and Alaska.

“Siberian merchants ran Hawaii for two years, Irkans from Alaska drove to California ice for sale, built logistics so that in a year they go through trade expeditions along the Irkutsk-Alaska-Irkutsk-China-Irkutsk-Moscow-Irkutsk route and get a good profit for the development of cities , – told in the organizing committee. – The entire route of the expedition is a water route of 13 thousand kilometers. Last year, 7 thousand kilometers of the route were passed, in 2018 the seafarers will have to overcome the most difficult part of the route: Petropavlovsk-Kamchatsky – Anadyr – Nom – Dutch Harbor – Anchorage. During the expedition a documentary film is made, the main idea of ​​which is to show vivid examples of the development of entrepreneurship, the unique nature of Siberia and Alaska, and tell about the history. ”

The expedition takes place on an inflatable ocean catamaran “Seeker”. It is designed and made by the Novosibirsk master Anatoly Kulik, who made a round-the-world trip in the southern latitudes on this model. The expedition organizers have already arrived to Kamchatka, where the catamaran “Seeker” spent the winter. Currently, it is assembling and preparing for a responsible transition. In addition, the crew of the expedition has a vacant seat for the second videographer.

“Participants of the expedition are invited to the role of the second videographer, who is ready to join the crew from Petropavlovsk-Kamchatsky to Anadyr. Draft catamaran 10 cm allows you to land in places where almost no one has been. This will ensure the uniqueness of video and photography. Required experience of sea hikes and excellent examples of video. The conditions are coordinated individually, “the organizing committee informed.

After the completion of the expedition will be released a film in Russian and English languages, a guide on the route “100 best places from Baikal to Alaska” and a photobook.

Kamchatka, News, Business, Travel > Kamchatka News, Russia Far East > On Kamchatka on June 17, the second stage of the Baikal-Alaska expedition will start. Who wants to be a videographer?