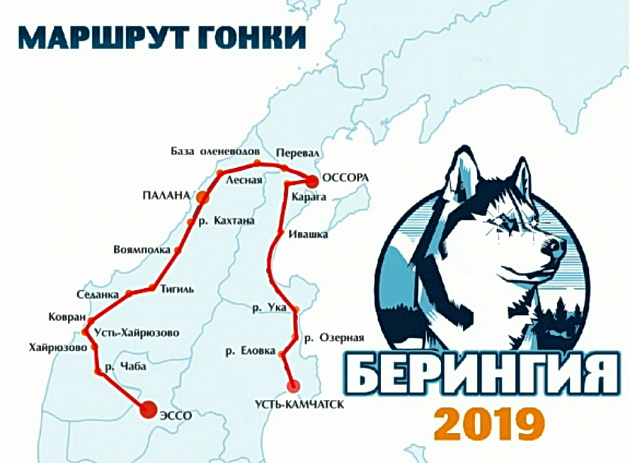 “Speaking about the route of the race“ Beringia ”, we never call the exact numbers and the finish date. We have many rivers and volcanoes along the way, so you can never say for sure how many days we will go through the race and for how many kilometers. Rivers can open up, and sprinkle volcanoes ash ash. The temperature on the route can change dramatically during the day, and this is one of the surprising features of the Beringia, ”said Artem Chernov, deputy head of the Beringia – 2019 race. – This year we plan to finish on March 23. But these are only plans. Kamchatka weather always gives surprises. ”

The route of 2019 is divided into 16 stages. The longest – stage 1 – “with. Esso – p. Chaba – with. Khayryuzovo. Kayuram to go 210 kilometers, and on this they are given a day. The shortest stage is the fourth. Ust-Khayryuzovo – with. Kovran. The distance between the control points is only 17 kilometers. In the villages of Palana and Ossora, the race participants will rest for a day – the regional authorities have prepared a large program for the meeting of the Beringians.

“If the weather permits, the road to the finish line in Ust-Kamchatsk will pass through Lake Stolbovoe – this is the penultimate point of the route. There we plan to stay for a day. But if the Kamchatka spring decides to make corrections, then we will be forced to change the route and go through the “Elovka” checkpoint, Artyom Chernov added.

Recall that the opening of the traditional Kamchatka dog race “Beringia –2019” will be held at the V. Fatyanov biathlon complex on February 23. For the audience is preparing a grand sports and entertainment festival. According to tradition, during the event, a guest Russian stage artist will perform in front of the assembled audience. Tickets for the opening of the Beringia-2019 can be purchased online at ponominalu.ru or at the points of sale of the MTS group of companies and Allo stores, their cost is 400 rubles.