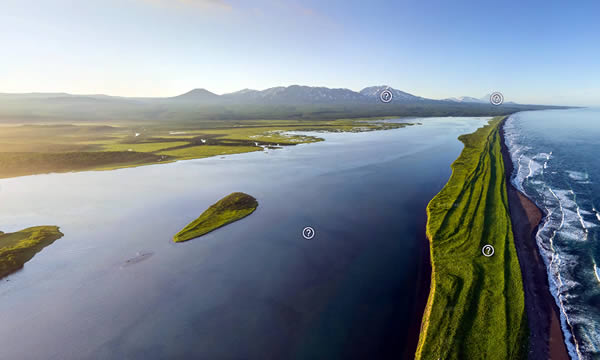 The portal “My Planet” selected the best panoramas for the past year.

The list includes two panoramas that were shot in Kamchatka.
One panorama is called “Over the Semyachik Spit. The east coast of the Kamchatka Peninsula. Bering Sea ”, another -“ Kronotsky Lake. Kamchatka, Russia. ”

“This collection contains the most beautiful places on our planet, shot in 2019. This, for example, Kamchatka – the kingdom of nature, landscapes of unearthly beauty and wild animals, almost not disturbed by human invasion. The largest freshwater lake of the peninsula, Kronotskoye, lies in its central part, and the eastern coastline stretches for more than 2000 km and there are several world-famous reserves », – said in a short explanation on the site” My Planet “.

All panoramas were created by the participants of the Airpano project. Unique photos with the possibility of an all-round view began to be created back in 2006. During this time, photographers made more than 4,000 panoramas.

The participants of the Airpano project have been to Kamchatka more than once. They created panoramas depicting Kamchatka volcanoes (Klyuchevskoy, Tolbachik), Khalaktyrsky beach, bears, lakes and Petropavlovsk-Kamchatsky.

3D panoramas of Kamchatka can be viewed on our website https://kamchatka.name/category/3dpanoramas

Kamchatka, News, Business, Travel > Kamchatka News, Russia Far East > Panoramas shot in Kamchatka are included in the list of the best for 2019