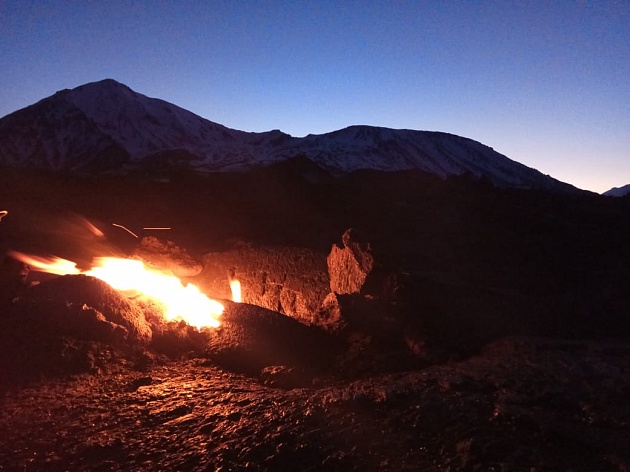 The natural park “Volcanoes of Kamchatka” is actively working on preparations for the summer tourist season. At the end of June, the employees of the environmental institution made a trip to the territory of the Klyuchevsky Nature Park – the New Tolbachik Tolbachinsky eruption (2012-2013).

In the period from June 26 to June 30, 2018, the specialists of the Natural Park “Volcanoes of Kamchatka” were located in the territory of the Kleshnia (Rodnik) site, located within the boundaries of the Klyuchevsky Nature Park. The purpose of the stay of specialists was to “de-conservation” of the environmental cordon and to put in order the objects of the tourist infrastructure after the end of the winter period. Cleaning was carried out on the territory of the camp, new information stands were brought in and installed – a map with images of new lava flows, a general view of the Klyuchevsky Park from space, indicating the directions of the routes.

Today, infrastructure facilities in the parking lot “Kleshnia” are completely ready for reception of tourists.

Also waiting for tourists and not cooling down from 2013, the lava flow, which appeared as a result of the New Tolbachik Fissure eruption. In June of this year, volcanologists managed to measure the temperature of the lava flow. “Thanks to scientists, we can now accurately tell our visitors that the temperature of the lava flow is 470 degrees,” notes Alexander BICHENKO. – The temperature has slightly dropped compared to the previous years, but, nevertheless, the lava is still hot and continues to glow. And this causes an extraordinary, fantastic action, which must be seen with our own eyes. ”

The “Klushnia” parking lot (Rodnik) has become a new place for stopping tourist groups for rest before a many days’ hike after the cordon “Rodnik” and the base “Tolbachinskaya” of the nature park were destroyed as a result of the New Cracked Tolbachinsky eruption (2012-2013) Volcanoes of Kamchatka. ”

In the parking area there is the most important thing for the base camp – the source of clean drinking water, which comes from the glaciers. The parking lot is protected from strong winds by slag hills. Having climbed one of them, you can admire the majestic volcanoes (among which are Flat and Sharp Tolbachiki, Bolshaya Udina), see the frozen lava flow 2012-2013, volcanic bombs of a wide variety of forms.

Pedestrian and automobile tourist routes, including a visit to unique natural sites (the Northern Breakthrough cones of 1975-1976, the crater Zvezda, the Dead Forest) begin from the “Kleshnia” parking lot. From the parking you can climb the Flat and Sharp Tolbachiki. Crossing the lava stream along the marked route, in places you can see the still not cooled lava or look into the caves that store the heat of the Earth.