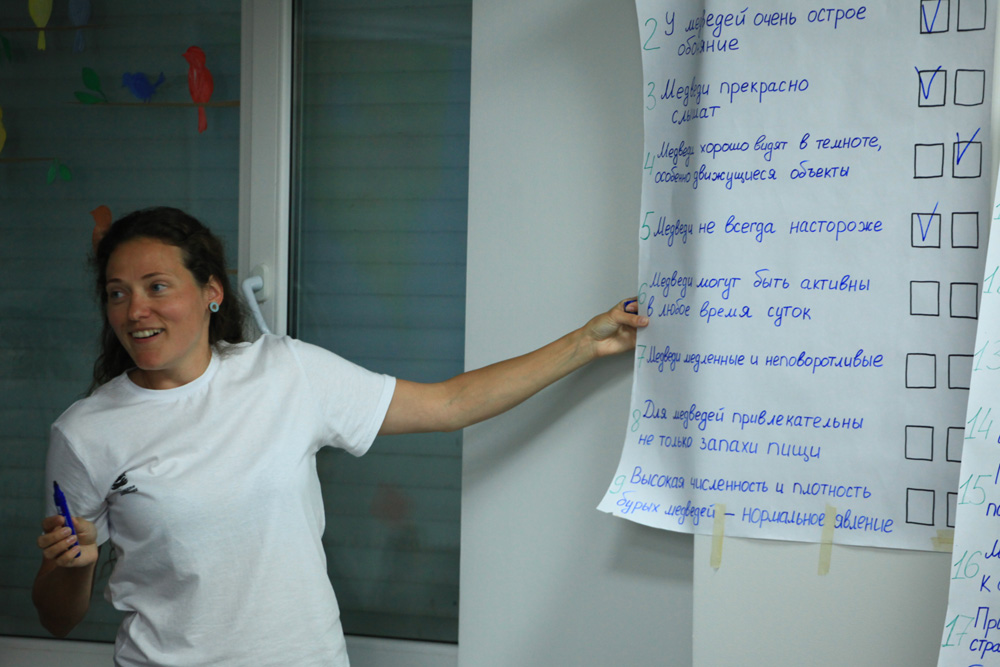 In the visit center of the Kronotsky Nature Reserve in the village of Ozernovsky, specialists who study the behavior of Kamchatka brown bears and are working on a program to reduce the number of conflicts between humans and wild animals gave two lectures.

The events were held within the framework of the environmental project “Brown Bears and Man – Harmonious Neighborhood in the South of Kamchatka”.
The project participants communicated with local residents – a researcher at the Institute of Water and Environmental Problems of the Far Eastern Branch of the Russian Academy of Sciences, a zoologist Sergey Kolchin and an associate professor at the Faculty of Public Administration of the Lomonosov Moscow State University Varvara Sazhina. The lectures were held in an interactive format. The first lecture was devoted to the behavior, ecology and physiology of the Kamchatka brown bear.

“We analyzed with the audience the myths and facts about Kamchatka brown bears, because often a lack of information about these animals leads to incorrect behavior of people when they meet them. The audience learned about the peculiarities of the lifestyle of Kamchatka brown bears, their family relations, hierarchy, and distribution over the territory. Special attention was paid to the group living in the south of Kamchatka, the density of which is the highest on the peninsula due to abundant natural food, ”said Sergey Kolchin.

During the second lecture, residents of the villages bordering the South Kamchatka Federal Reserve were told about the main reasons for the occurrence of conflict situations with bears, the correct organization of life and economic activity. First of all, it was about the collection, storage and disposal of food waste, the maintenance of household plots, excluding the attraction of bears to the villages, the prevention of unwanted encounters with animals.

“Many people come to Kamchatka specifically to watch bears in the wild. As a rule, they travel with experienced guides. As for local residents, often encounters with predators occur unexpectedly and in an undesirable environment: for example, when bears enter villages. At the lecture, we showed fragments of specialized documentary films about bears, where signs of aggression of brown bears are shown, and discussed the situations our listeners found themselves in when meeting animals, ”said Varvara Sazhina.

Experts explained in detail the rules of conduct when meeting with bears on the territory of settlements and beyond. They talked about means of repelling bears (flare and bear spray) in case of aggressive behavior, about their correct use and benefits.

“The lecture was attended by residents of the villages of Ozernovsky, Pauzhetka and the villages of Zaporozhye, who took part in a family educational program on the Kuril Lake in the South Kamchatka reserve, as well as our regular visitors – travelers from the Chaokhch tourist club. People listened very attentively to our experts, were happy when their knowledge about bears was confirmed, and expressed their readiness to follow the rules of behavior in the wild, handling waste, and an environmentally friendly way of life, which they previously did not know, ”said Daria Filippova, specialist of the Department of Environmental Education of the Federal State Budgetary Institution“ Kronotsky state reserve “.

“I really liked the lecture about bears. It was interesting to listen to Varvara and Sergei. I especially remembered about motherhood of bears, how the whole process goes. It was also informative to watch videos on how to behave with bears, if you happen to meet them, and what to do in this situation. I would like to say a big thank you to the guys and wish them success in their research! ”, Shared her impressions Olesya Bazykova from the village of Ozernovsky.

“Brown Bear and Man – Harmonious Neighborhood in the South of Kamchatka” is designed to reduce the anthropogenic impact on bears in the South Kamchatka Federal Wildlife Refuge and to reduce the number of conflicts between animals and humans in settlements located in adjacent territories. The program is being implemented with the support of the Presidential Grants Fund and the Zapovednik charitable environmental fund. General partner – FSBI “Kronotsky State Reserve”.