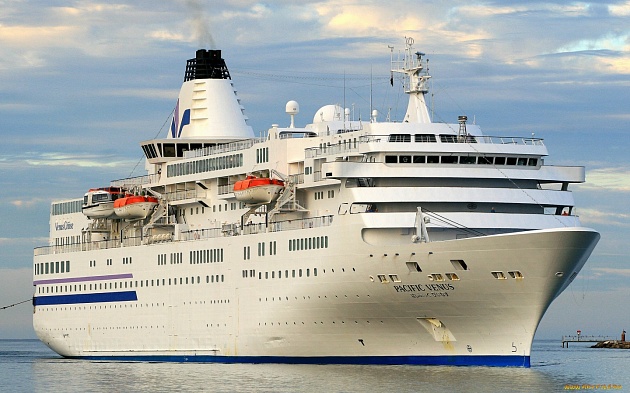 On September 4 another cruise liner came to the port of Petropavlovsk. “Pacific Venus” came to us from Japan.

On its board are 368 passengers, mostly residents of Japan, and 204 crew members. In the port of Petropavlovsk-Kamchatsky they have a 3-day parking lot.

“This vessel is the second largest cruise liner, which is registered in Japan. It already came to the Kamchatka coast in June 2015. The vessel came to us from the port of Yokohama, here tourists will have an opportunity during three days to get acquainted with the natural sights of Kamchatka, learn more about the culture, history, indigenous small peoples of the region. After that, the liner will return to Japan again, “- said the head of the Agency for Tourism and External Relations of the Kamchatka Territory Elena Stratonova.

The tour operator prepared an excursion program for passengers of the cruise ship in Petropavlovsk-Kamchatsky and its environs. For three days tourists will make almost 500 excursions.

Passengers of the cruise liner will go on sightseeing tours in Petropavlovsk-Kamchatsky, they will be able to immerse themselves in the life and culture of the peoples of Kamchatka in the ethnocultural complex of Kainyran, they will go to the foot of Avachinsky volcano, and also to sea walks along Avacha Bay. In addition, we have organized special shuttles, in which the ship’s passengers can independently reach the city center, visit a number of facilities. Our Kamchatka translators will work with all organized groups.

In the evening of September 6, the cruise ship Pacific Venus will leave Petropavlovsk-Kamchatsky and travel to the shores of Japan.

Recall, cruise ships visit Kamchatka from May to October – so many favorable tourist season. In 2018, the cruise season in Kamchatka was opened on May 3 – this day the Celebrity Millennium liner with 2,089 residents of the United States, Japan, Canada and other countries came to Petropavlovsk port. On May 14, Kamchatka accepted the ship “Norwegian Jewel” with 2300 passengers from 51 countries, and on May 17 came “Silver Shadow” with 339 tourists. In June and July, at berth No. 5 of the sea station in Petropavlovsk-Kamchatsky, the Silver Explorer cruise liner moored twice, carrying 235 foreign tourists on board. Until the end of the season in the port waiting for a few more cruise ships.

In total in 2018 within the cruise program in Petropavlovsk-Kamchatsky 12 ships will come, and the total number of foreign tourists will be 13,500 people. Due to the greater tonnage of vessels, the number of tourists visiting the edge on cruise liners will more than double. In 2017, Kamchatka also visited 12 aircraft, and the number of tourists to them was 5675 people.

“Pacific Venus” has 12 decks, 9 of which are passenger. It can accommodate a maximum of 680 passengers, which will be accommodated in 258 cabins. Crew and attendants – 220 people. On board the liner there are two-story atrium, cinema, main restaurant, cafes, bars, boutiques and much more.