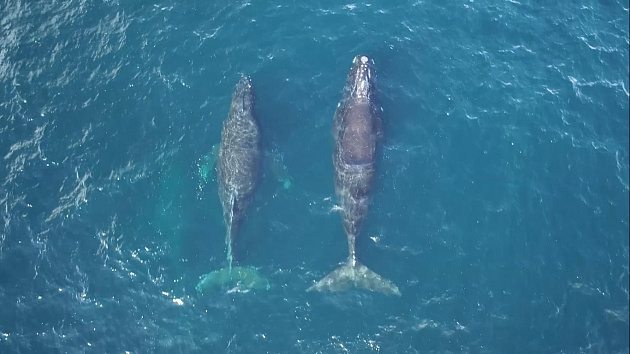 In the protected area of ​​the reserve “Komandorsky” registered Japanese whale.

Over the past week, our staff met three different individuals of the rarest representative of large cetaceans.

The Japanese whale is listed in the International Red Book as an endangered species. It is endemic to the North Pacific. According to various specialists, there are from 500 to 900 individuals. Of these, 17 whales were registered in the 2017 Russian photo catalog, four of which were registered in the Komandorsky reserve in 2012–2013. Now another 3 Japanese whales got the ID number.

The biology of the Japanese whale is studied extremely poorly, for example, it has not yet been the site of its reproduction, and the migration routes have been little studied. It is believed that the animals are kept both individually and small, while all three individuals encountered were fed in different clusters of humpback whales. “The last time we worked at sea was a Japanese whale in 2013. Then the animals moved in pairs. We meet such interspecific associations for the first time. Apparently, in this way animals increase the way of food extraction. “Assistant” on science Yevgeny Mamaev.

Reserve “Commander” – the largest marine reserve of the country. In addition to all the islands of the Commander archipelago, it includes a 30-mile water area. Protected from fishing, the water area serves as a feeding ground for 21 species of cetaceans.

The islands are located on the path of whale migration.

Currently, the whales are returning to the southern seas, where they breed, and the untouched water area of ​​the reserve serves as a place where animals replenish their strength before a long journey.

The official site of the reserve “Commander” www.komandorsky.ru