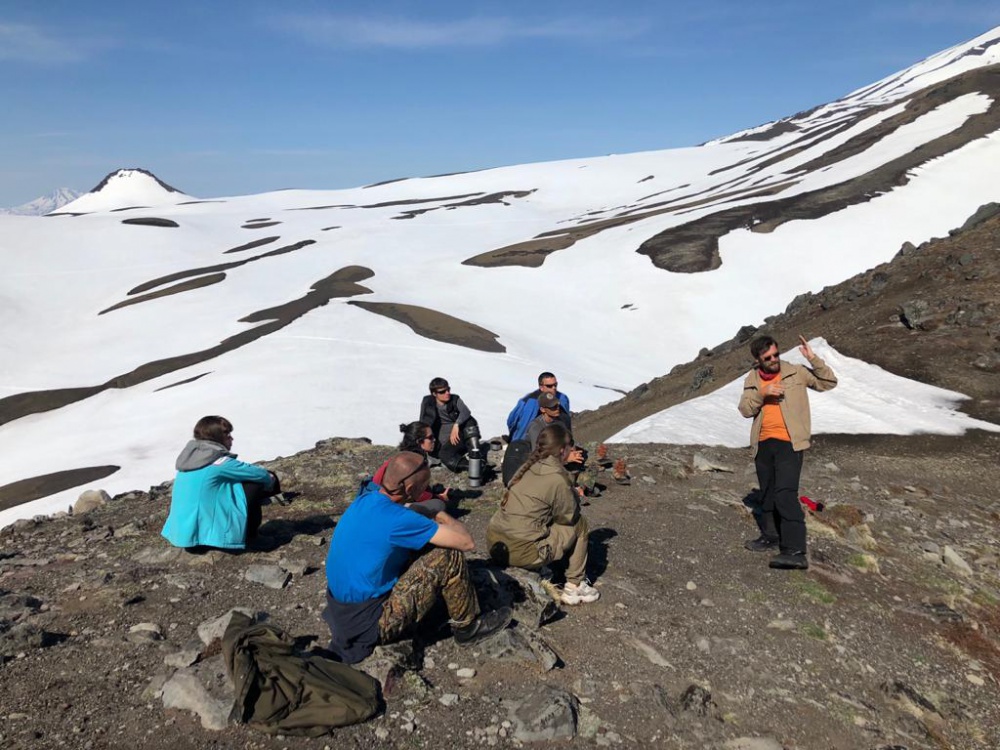 Employees of the Kronotsky Reserve guard service, working with tourists on routes, underwent extensive training before the start of the tourist season.

During the training program, all issues related to interaction with visitors were studied: from security to the interpretation of natural heritage. The final stage was the training of volcanologist Sergei Samoilenko. The creator of the most popular interactive museum “Volcanarium” in the Kamchatka Territory told state inspectors about the main methods of working with guests, allowing them to captivate with the idea of ​​nature conservation. The study took place at the foot of the Avachinsky volcano.

Escort of tourist groups along the routes is one of the duties of the employees of the protected areas protection service. The task of Sergey Samoilenko was to give inspectors a tool for working effectively with visitors, so that they would not only broadcast the idea of ​​protecting nature to tourists, but also be convincing.

“Who, if not people deeply involved in the conservation work, can share their feelings and thoughts, penetrate the soul of the guests. We talked about how to correctly compose a story, pick up facts, so that a tourist has a complete picture in his head, why nature needs to be preserved, a specific place. And, of course, intrigue must be present in the narrative in order to ultimately surprise the listeners and keep their interest in the subject of the story, in nature, – said Sergey Samoilenko. – In addition, philosophical and ethical issues arise during the tour. How, for example, to explain that not only animals and plants, reservoirs, forests need protection, but also, it would seem, invulnerable mountains and volcanoes. But uncontrolled tourism can unrecognizably change beautiful landscapes. ”

During a workshop in nature, inspectors themselves temporarily turned into tourists. At the foot of the active Avachinsky volcano, they listened to stories about the processes taking place inside our planet, the history of the formation of the Kamchatka Peninsula, and climbed.

“Sergey is not only a specialist in the field of volcanology, but also an excellent expert on botany and geology, all natural processes. He told us about geysers and their work, about volcanoes and the safety of being in close proximity with them, about glaciers and snowfields. Thanks to the excellent presentation, even scientific, difficult-to-pronounce terms, which often tire the listeners, were easily perceived and remembered. This experience will be useful when working with tourists on routes, ”said Elena Subbotina, state inspector of the Kronotsky State Reserve.

“Geology and volcanology have become much closer and more understandable. The complex science of the Earth’s structure, stones and minerals, the movement of tectonic plates was interpreted in such a fascinating and exciting way that the climb to the jumper between Avacha and Koryaksky volcanoes became a dynamic illustration of the described phenomena, ”shared his impressions Alexander Khachukaev, state inspector of the Federal State Budget Institution“ Kronotsky State Reserve ” .

The trip to the volcano with Sergey Samoilenko, who worked for many years at the Institute of Volcanology and Seismology of the Far Eastern Branch of the Russian Academy of Sciences, including studying the volcanic regions of the Kronotsky Reserve, was the completion of a three-month training for the inspector staff on the guide program. The employees of the protected areas protection service passed tests revealing the features of their behavior in the environment or in a certain situation, talked with a psychologist, and studied at storytelling, leadership and interpretation courses. They also completed a university course of guides and route preparation: wrote essays, developed and defended their route projects in exams.