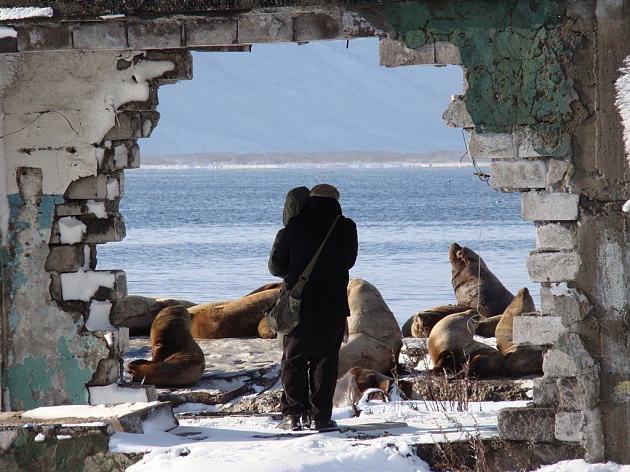 The issues of organization of landscaping of the seasonal populations of Steller Sea lions within the boundaries of the Petropavlovsk-Kamchatsky urban district were discussed at a recent meeting of the interdepartmental working group at the Ministry of Natural Resources and Ecology of the Kamchatka Territory.

The situation related to monitoring the status of the seasonal grouping of Steller sea lions in their seasonal habitats in the water area of ​​the Avacha Bay and visual observation of the Red Book marine mammals, the conduct of subbotniks and actions to clean water bodies and their shores, the improvement of the seasonal populations of sea lions and the placement of tourist infrastructure, The stand with the rules of conduct and the requirements of legislation in the field of environmental protection.

According to Sergei Kornev, a candidate of biological sciences at KamchatnIRO, candidate of biological sciences, for the last 15 years the status of the Steller sea lion population in the places of the bays near the Mokhovaya bay remains unchanged, where about 40 animals live permanently. And this causes alarm among scientists, because among this number there are no young animals, hence, there is no natural increase.

There are also factors that cause anxiety of the Red Book species. Basically, these are people who contribute to the increased anxiety of marine mammals, and also create a negative ecological situation. Some visitors to the pier do not respect the permissible distance, make noise, can afford to throw various objects in animals. And left in the vicinity of the Mochov pier, garbage bags that exude the smells of fish can become “prey” to the sea lion and, as a result, cause clogging of the animal’s stomach. Many people unknowingly bring frozen fish products as a treat to Steller’s sea lions. However, to do this categorically it is impossible – that there are no problems with digestion, the animal should eat only fresh fish. Disturbing and stray dogs, which flocks attack Steller’s sea lions, as well as bear the deadly for eared seals virus of the plague carnivorous.

During the discussion, the members of the working group came to a common opinion that the works on organization of landscaping of the seasonal breeding grounds of Steller Sea lions within the boundaries of Petropavlovsk-Kamchatsky urban district should be continued. It is planned to equip the existing sites, attract business representatives to solve emerging issues.

Socio-educational work among the population is also of great importance. “We want residents and guests of the Kamchatka Territory to have the opportunity to come to the equipped places of the sea mammal hauls and observe the life of the sea lions, without disturbing their peace. Of course, great importance is ecological literacy. One should realize that any feeding of wild animals in their natural habitats can lead to harmful consequences. One should remember that any Red Book species are especially vulnerable, “says Natalia Rybnikova, a specialist in the Department of Environmental Education, Recreation and Monitoring of Kamchatka’s Volcanoes Nature Park. “Together we can unite and help preserve unique habitats within the boundaries of our city.”

Steller sea lion (Steller’s sea lion) belongs to the order of the Pinnipeds (the family of Eared seals). The only species in the genus with a declining population over most of the range. Animals are on the list of endangered species and are listed in the Red Book of the Russian Federation, the Red List of IUCN-96.

In the world there are only three unique places, where huge sea lions live right in the city. Two of these cities are in the Russian Far East – in Petropavlovsk-Kamchatsky and Nevelsk (Sakhalin). Another such city is in the USA.

For wintering in the boundaries of Petropavlovsk-Kamchatsky, the sea lions have been chosen by the capes of Chavych and Signalny, as well as the old pier in the Mokhovaya microdistrict, which is one of the most visited among the Kamchatka people and guests of the peninsula. Huge beasts, weight of which reaches a ton, can be found on the baits from October to April.