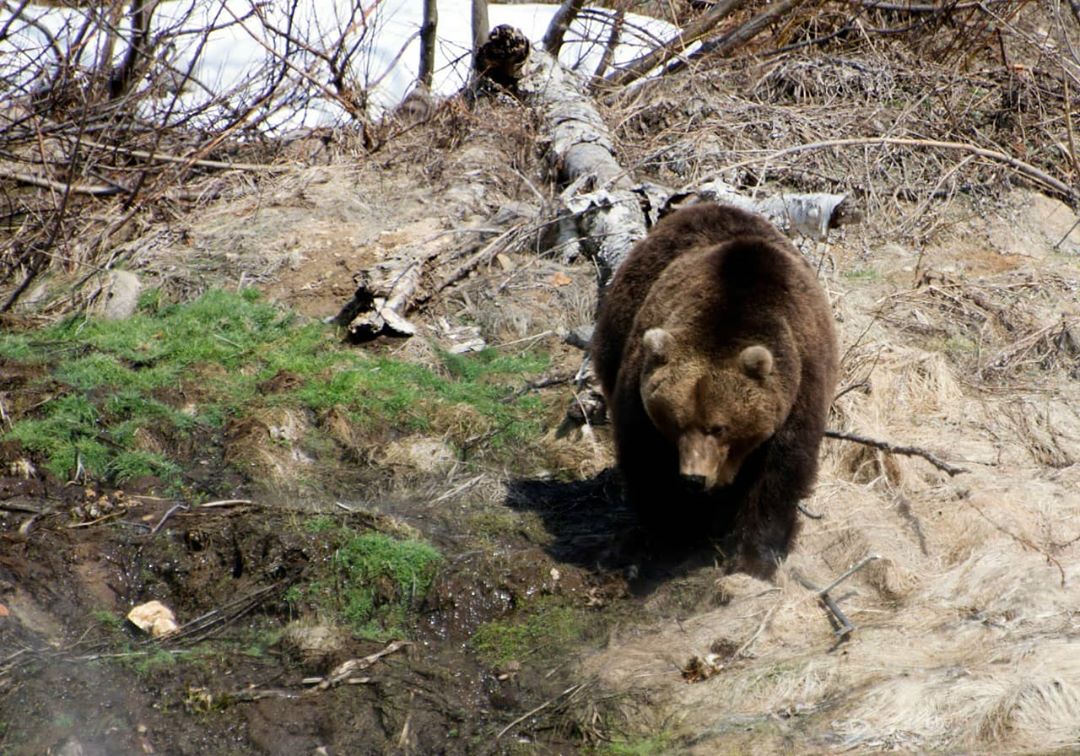 May and June are the beariest months in the canyon of the warm Geysernaya River and its environs.

Now on the thermal platforms covered with fresh grass, one and a half dozen animals feed. Some will soon begin the “wedding”. For the third year in a row, monitoring of the seasonal group of bears is carried out by specialists from leading research organizations in Russia and employees of the Kronotsky Reserve.

“Despite the spring snowstorms, the slopes are quickly cleared of snow, and grass appeared in the glades near the Geysernaya River in April. We were lucky – on April 14, the day the first geyser of the reserve was opened, we found the appearance of the first bear this season – it turned out to be our old friend, the male Scar. Now about 15 animals have come to the Valley to lie in warm springs, eat grass and find a couple. Many of them are familiar to us from past years. Young bears play on the slopes, more respectable adults devote more time to rest and feeding. Mating pairs of animals have not yet been observed, but the rut is about to begin, ”said Evgenia Volkova, research engineer at the Department of Vertebrate Zoology, Faculty of Biology, St. Petersburg State University.

The valley of geysers is small, but unique. This is a small section of the gorge of the warm Geysernaya river with an area of ​​6 km2, where about 60 geysers are concentrated – a rare variety of hot springs. Here you can see hundreds of exits of steam jets, the usual thermal springs for Kamchatka, mud boilers with colored clays and boilers with boiling water. Such a density of hydrothermal manifestations in a small space is nowhere else. At the same time, the Valley of Geysers in the Kronotsky Reserve is one of the five largest geyser fields in the world.

About 60 bears pass through the green oasis every year in May and June. Some are delayed, others are in transit. Animals graze near hot springs in clearings covered with fresh grass: they replenish the vitamin supply and become saturated after a winter sleep. During this period, the mating season of the largest land predators of Kamchatka passes – it lasts until the end of June or beginning of July. Then, with the onset of spawning of salmon in the rivers and the ripening of berries in the tundra, the bears leave for their feeding areas.

Since 2018, the behavior of bears coming to the Valley of Geysers, their distribution over the territory of a unique natural object in May and June has been studied by a monitoring group consisting of specialists from the Kronotsky Reserve, the Institute of Water and Environmental Problems of the Far Eastern Branch of the Russian Academy of Sciences and St. Petersburg State University. One of the goals of the research is to reduce the anthropogenic load on animals in an important period for them.

“We study the gender and age composition of the seasonal group of bears that come here every spring, their distribution across the territory. Our main task is to understand how the presence of people – tourists, reserve employees, the noise of helicopters affects the animals, that is, to study the whole complex of effects on bears in an important period for them. Based on the results of the research, recommendations are developed on the timing and regime of the month of silence – the period of restrictions on visiting the Valley of Geysers, ”said Sergey Kolchin, researcher at the Institute of Water and Environmental Problems, Far Eastern Branch of the Russian Academy of Sciences.

Bears of the Valley of Geysers behave like ordinary wild animals when they see a person – they try to go away, which avoids conflicts, but violates the animals’s plans to stay in an oasis. In addition, after the mudflow in 2014, the area of ​​thermal meadows has seriously decreased, that is, the number of places where bears can feed in the spring is limited. Such sites remained only in the central part of the Geysernaya river valley, where tourist routes pass, and accordingly, the impact of people on the habitual way of life of animals increases. This must be taken into account when establishing the terms of the month of silence, that is, the complete rest period for bears.

Scientists conduct observations of bears with the help of camera traps. Automatic cameras make interesting photo and video frames. Using technology, specialists record newly arrived animals, monitor their movements and behavior, and the characteristics of communication with relatives. Research will last until the end of June.

We add that in the summer and autumn of 2020, the implementation of the environmental project “Brown bear and man – a harmonious neighborhood in the south of Kamchatka” will continue. The program is designed to reduce the anthropogenic impact on bears in the South Kamchatka Federal Reserve and reduce the number of conflicts between animals and people in settlements located in adjacent territories. The project is implemented with the support of the Presidential Grants Fund and the Zapovednik charity environmental fund. The general partner is the Federal State Budgetary Institution Kronotsky State Reserve.