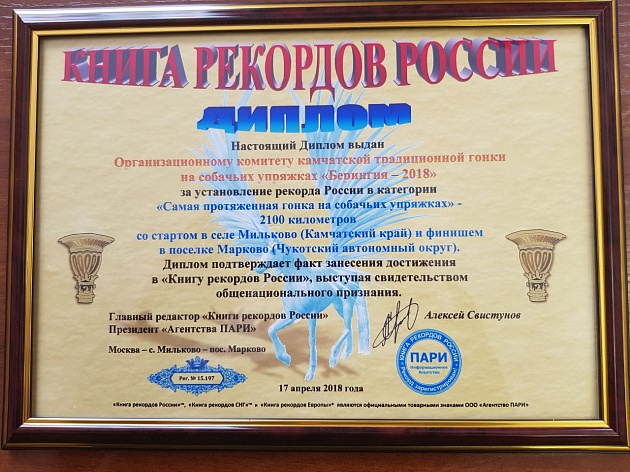 “According to the book of records of Russia, I, as its editor-in-chief for the past 29 years, with full responsibility, I can say for sure, there is a record! Those 2,100 km, which were declared, are, “- said Svistunov.

By adding the result of “Beringia-2018” to the Guinness Book of World Records, which records all the world’s achievements, the work continues.

“Beringia-2018” is declared there, as the longest race in the world on dog sleds. Thus, having collected all the documents and having provided them to our colleagues in London, we hope to shortly provide the Kamchatka and Chukchi Territories with diplomas in which it will be written and confirmed that the Guinness Book of Records, located in London, counts exactly the same as The book of records of Russia in Moscow “- added Alexey Svistunov.

The ceremonial transfer of the diploma under the registration number 15.197, confirming that the Kamchatka traditional dog race “Beringia-2018” is the longest in our country, was held on April 20 in Petropavlovsk-Kamchatsky at the ceremony of honoring and rewarding the race participants.

Governor of the Kamchatka Territory Vladimir Ilyukhin addressed the officials with a salutatory word.

“Today we are very pleased to welcome and honor the heroes of the race who went through the most complicated route of” Beringia “- the longest in the history of riding sports, connecting our region and Chukotka for the third time in history. I am proud that this record belongs to Kamchatka and our race “Beringia”. For 39 days we all watched tensely as the struggle was going on. From all parts of our country, from abroad, messages were sent in support of our kayurs. Not all have reached. But they are all absolute heroes, even those who did not reach the finish line. They are heroes because they went to this race, “said Vladimir Ilyukhin. – I want to express my words of deep gratitude and respect to these people who have gone through incredible difficulties. Also I thank the escort team, volunteers, organizing committee, border guards who helped with logistics and, of course, our friends who financially helped to hold this “Beringia”. A low bow to the residents of Kamchatka villages, through which the race route passed, they gave all their heart and soul, meeting our kayurs. “Beringia” is our common victory. Victory of people who respect and honor the culture, customs and traditions of the North. ”

Kayur from the Chukotka Autonomous Okrug Gennady Tomilov became the owner of the first prize in the nomination “For fidelity to the traditions of the North”. The second in this nomination is Roman Mandyatov. Undisputed victory in the nomination “For national coloring” went to Herman Ainachgin from Khailino. All the race he went in the traditional northern clothing – kolyalke, torbas and malachay. As a prize, a cuirue was awarded a certificate for 100 thousand rubles. He is also recognized as the “Gentleman of the race”. And the youngest participant of the race Alice Ischenko became “Queen of Beringia-2018”.

The award ceremony ended with a festive concert with the participation of artists from the State Governor’s Academic Koryak National Ensemble named after A.V. Gilya “Mengo” and other creative teams of the Kamchatka Territory.

Recall, the race kicked off on March 11 in the village of Milkovo, Kamchatka Territory. At the start of the race came 15 kayurs, to finish in the Chukchi village Markovo April 18 reached 11. The first to withdraw from the race Anfisa Brazaluk and Timofey Gynuntegin. For breaking the rules, Alexander Dolgodushev dropped out of the competition. Later, the debutant of the race, Yaroslav Adukanov, announced the end of the fight.