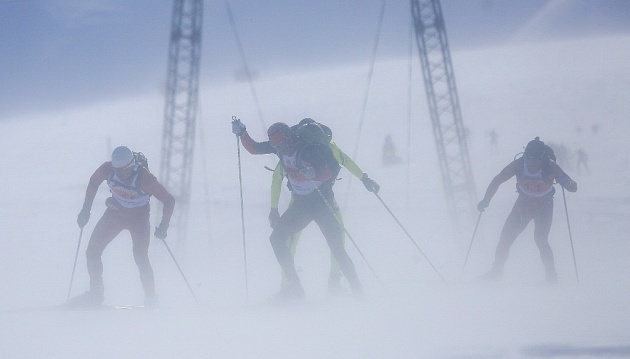 In Kamchatka on April 21, within the framework of the regional festival of winter sports, the XV ski race “Mutnovsky extreme marathon” was held. 40 sportsmen from Novosibirsk, Yuzhno-Sakhalinsk, Krasnogorsk, Khabarovsk, Murmansk, Ugra and the Kamchatka Territory, as well as Germany and Kazakhstan took part in the 60-kilometer starts.
Athletes fled along the traditional route from the Mutnovskaya GeoPP to the Thermal settlement, forcing the most difficult part of the route on the descent from the Mutnovsky pass. The winner of the men’s race was the bronze medalist of the 2010 Olympic Games in the team sprint, world champion Alexei Petukhov. His time was 2 hours 31 minutes and 10 seconds. The second was the five-time winner of the Mutnovsky marathon, Kamchatka skier Konstantin Ignatiev. The representative of Ugra, the two-time world champion in the skiathlon and the team sprint, the winner of the Tour de Ski multiplayer Sergei Ustyugov closed the top three. It should be noted that in the first five stealers included two more Kamchatka skiers – Yelizovo resident Eduard Eremenko and Nikolai Abakumov from Petropavlovsk-Kamchatsky.

The winner of the women’s marathon race was another representative of the Russian national team in cross-country skiing – Ural athlete Elena Soboleva. The second was Anastasia Moskalenko from Novosibirsk, the third time was shown by Marina Chernousova from Yuzhno-Sakhalinsk. Among the strongest there was a place for a Kamchatka sportswoman – Valery Andreeva from Petropavlovsk-Kamchatsky finished with the fourth result in Thermal. Closed the top five in the women Gulnara Kollegova from the Perm region.

This year, the Mutnovsky Marathon once again confirmed its extreme status. As reported by the IA “Kamchatka”, two of the five starting athletes from Germany withdrew from the race. Less than an hour on the track held a German stayer Michael Pitskh. And on the descent from the pass, which is the most dangerous part of the track, was injured by Karsten Khan’s left leg.

Winners and prizers of the extreme marathon received valuable gifts and cash prizes – 50,000, 40,000 and 30,000 rubles. The monetary reward was expected and the participants of the flower ceremony, who occupied from the fourth to the sixth places.

Recall skiers ran a classic distance of 60 km along an unprepared track, overcoming descents and ascents, plains and passes.

Mutnovsky launches have been held in Kamchatka since 2000. The idea of ​​marathon belongs to the Kamchatka sportsman and the big fan of skiing Boris Kotikov.